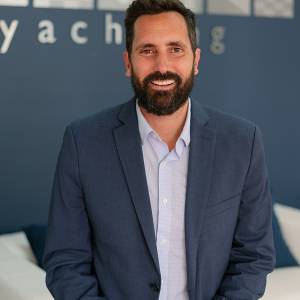 Bob Denison is the President of Denison Yachting, which employs more than 150 employees across 22 offices in the United States.

Bob Denison was born at Broward General, in Fort Lauderdale, the day after it last snowed in this town, January 20, 1977.

Since that cold, dreary day, Bob has accomplished only 3 things worth bragging about: 1) He was the Marlins first bat boy; 2) He married the prettiest girl alive, Daniella Chisholm; 3) He somehow figured out how to have kids: Rivers (6), Nora (3), Summer (2), Scout (0.5).

Of much lesser importance, Bob now runs Denison Yachting, which employs 150+ of the best people the marine industry has ever known. These good people work in 22 offices across the U.S.

Denison sells and charters about 1,000 yachts a year, which might sound impressive, but really isn’t when compared to the great things Bob’s grandparents, parents, and uncles accomplished before him.

Back in 1948, Frank & Gertrude Denison visited Fort Lauderdale while on their honeymoon and decided to plant roots, buying a local business and renaming it Broward Marine. This business went on to build minesweepers and other military vessels to support U.S. and Allied Forces, and later built private yachts, at one point becoming the largest employer in Fort Lauderdale.

Broward Marine built more private yachts over 80’ than any boat-builder in the world in the 20th Century. When Bob talks about ‘standing on the shoulders of giants’, he really means it. He would be homeless if it wasn’t for the support of those that went before him: Frank, Gertrude, Kit, Ann, Skip and Ken Denison.