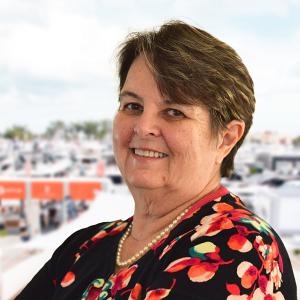 Patience Cohn, MIASF’s Industry Liaison, has worked in the marine industry for many years. Originally from Nantucket, Patience started out as a dock “girl” and during the summer after college brought a boat down to Fort Lauderdale, where she was immediately recognized and offered a job as the first female dock worker at Pier 66. Eventually Patience was lured from the land to the water and served on various vessels, starting out as a stewardess and then becoming a chef, and also serving as a captain. She returned to shore in the late 1990s and became a marina manager in Hilton Head, SC. After returning to Fort Lauderdale, Patience began volunteering at MIASF and spearheaded its legislative priorities, eventually joining the Board of Directors and serving for six years. Subsequently, she accepted a position as Chief of Staff at the association and has worked in a variety of capacities for more than 12 years. Her years of experience and her breadth of knowledge are an asset to the association, its members, and her co-workers.