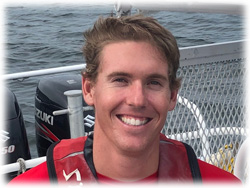 TowBoatU.S. Ft. Lauderdale has promoted Captain Weston Clemente to assistant supervisor. Captain Clemente started his marine towing and salvage career as a patrol captain at TowBoatU.S. Ft. Lauderdale and hasn’t looked back since. He grew up in Pompano Beach and was on, in, or near the water from the time he was a small boy. He attended Florida Atlantic University and was voted captain of the FAU Owls baseball team in 2018.

According to Larry Acheson, president of TowBoatU.S. Ft. Lauderdale, during Weston’s six-week training, he witnessed an incredible volume and diversity of jobs. He assisted with tricky salvage work, long distance tows and cargo launch jobs. He displayed natural ability and it was clear that he loved what he was doing. Once trained, Clemente progressed quickly, routinely volunteered for extra shifts and remained hungry to learn all that he could about the business. His easy-going demeanor and sense of humor, combined with professionalism and attention to detail, are a winning combination.

In June 2020, Weston was the natural choice when a supervisory role became available. He met this new challenge with the same enthusiastic attitude and skill set that earned him the promotion. The entire crew is excited to have him in this new role where he will do his part to help shape the company’s future growth for years to come.