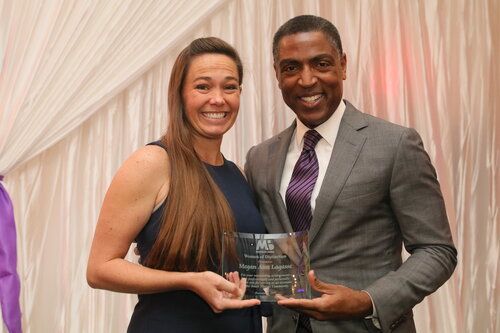 Broward County based Nautical Ventures Group has been named one of the Top 100 dealers in North America by Boating Industry Magazine, the leading trade publication for the marine industry for the fourth year in a row, and specifically ranked #17 in the Top 20 Group. Additionally, Nautical Ventures Group won Boating Industry’s Best-In-Class Award for Best Boat Show Strategy. Galati Yacht Sales and MarineMax were honored as members of the Top 100 Hall of Fame, and MarineMax was honored as a Boating Industry Top 100 Legend for being a part of the top 100 program for all 15 years of existence. Additionally, FB Marine Group was recognized as a Top 100 Dealer.

Congratulations to Megan Lagasse, Pier Sixty-Six Marina Manager, for being recognized by the March of Dimes as a 2019 Woman of Distinction! The annual awards dinner honors women who have achieved excellence in their respective fields and are devoted advocates for women and girls. In addition to overseeing all marina operations at Pier Sixty-Six, Megan supports #1000Mermaids and 4Ocean, two organizations working to preserve the waterways and marine habitats of South Florida. At Junior Achievement, Megan helped to launch the new “Sea the World” exhibit that encourages young people to pursue careers in the marine industry.

Nick Duke recently joined Denison Yachting, where he will help to manage current charter yachts, as well as secure new yachts for the company’s fleet. After working as crew, Duke joined Burgess in 2014, beginning in its yacht management division and later transitioning into charter management. After his time at Burgess, Duke joined IYC, where he was responsible for charter yachts in the Med, Bahamas, Florida and New England.

Pinmar has strengthened its team in the USA to support the rapid growth brought about by the new facilities at Savannah Yacht Center (SYC) coming fully online. Industry veteran Jeff Berg has joined the Pinmar team to manage the new paint facility at SYC. Jeff has 36 years of experience of fairing and painting superyachts having worked in major shipyards around the world. Yuriel Morales and Dayan Gil have joined the production team as senior paint supervisors. Dayan will head up production in Pinmar’s USA headquarters at Rybovich and Yuriel in the new Derecktor Shipyard Offices in Dania Beach. Both Yuriel and Dayan have extensive superyacht painting and project management experience, formerly running their own business Y & D Yacht Refinishing including previous roles with Rybovich and Classic Yacht Refinishing. Also joining the Pinmar team is Stefany Worswick who was recently appointed as sales manager. Working as part of the Pinmar commercial team under the stewardship of US Director of Sales Phil Burgess, Stefany will be responsible for business development, revenue generation and customer relationship management for the East Coast of the USA and the Caribbean.

The Florida Inland Navigation District is now accepting grant applications for waterway access improvement projects through its 2019 Assistance Program. Applications and additional information can be found on the District’s website at:

Waterway Access project types eligible for funding include public navigation, public waterway access facilities, waterfront parks, environmental education and boating safety projects directly related to the waterways. The District also provides grants for land acquisition which include opportunities for waterway access. Please see the program rules for more details on project eligibility. The funding level of this year’s program will be determined in July based upon the availability of funding to the District and the quality and number of applications received. Applications are due in the District office by 4:30 PM, March 27, 2020. For more information, contact Janet Zimmerman, Assistant Executive Director