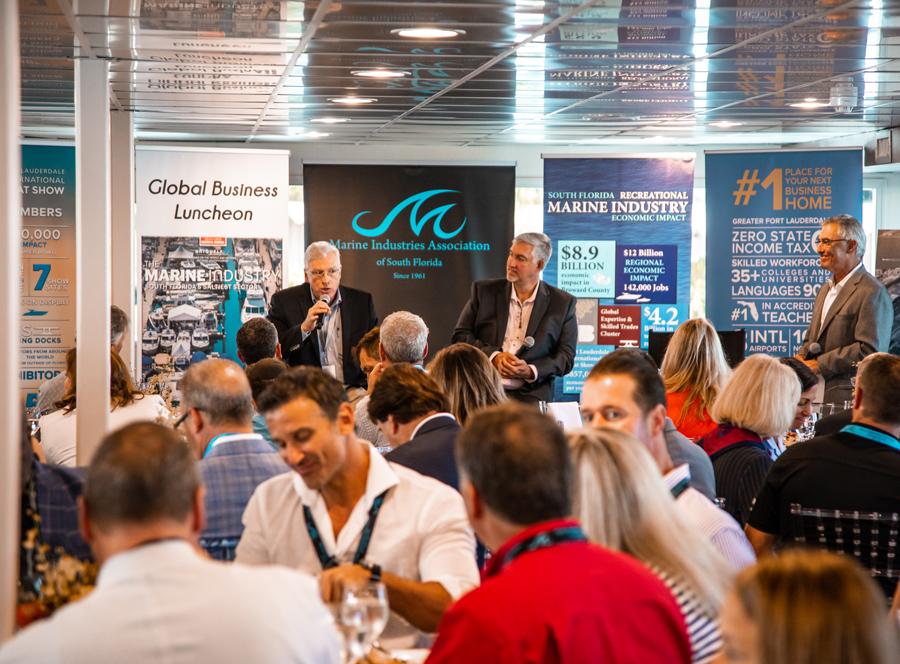 MIASF and the Greater Fort Lauderdale Alliance jointly hosted the 6th Annual Global Business Luncheon on Wednesday, October 30th with a panel discussion featuring John Kelly – former president and CEO of Crown Castle and current CEO of Bradford Marine, along with Lee Gossett - Chief Operating Officer and Senior Vice President of Delta Private Jets. Moderated by Howard Greenberg, the panelists offered insights and forecasting on their respective industries to an interested and enthralled audience of community and elected leaders.

The 4th Annual Marine Research Hub Summit was held on Thursday, October 31st and recognized the Ocean Exchange $100,000 Orcelle and $100,000 Neptune award winners, Chris Graves of Noon Energy and Nicholas Flanders of Opus 12. A competitive award conference that was held from October 28th to October 30th, Ocean Exchange funds start-ups with marine-based solutions to many of the earth’s problems, including energy and sustainability and partnered with the MRH to transition from Savannah to Fort Lauderdale. Also, at the MRH Summit, Patrick Lahey, co-founder and president of Triton Submarines, delivered a spectacular and captivating keynote address on the Five Deeps Expedition, the world’s first manned expedition to the deepest point in each of the five oceans using a submarine that was built by his company. In February 2020, the documentary Deep Planet, which chronicles the Five Deeps Expedition from the beginning, will air on the Discovery Channel.

Celebrating the 60th anniversary of FLIBS in groovy style, MIASF hosted its 60s-themed Exhibitors Party on Thursday, October 31st with The Beatlemaniax U.S.A. Plenty of Help! was supplied with food, drink, and lots of tie-dye and peace signs to go around. The event was free to attend, but party goers were invited to Come Together and collectively donated $1,000 toward Mission of Hope’s Bahamas relief efforts. After a Hard Day’s Night of dancing and singing, guests took the Long and Winding Road home, only to dream of the fun they had Yesterday.

At the Global Commerce Exchange reception hosted by the U.S. Department of Commerce on Friday, November 1st, MIASF’s president and CEO, Phil Purcell, was presented with a Certificate of Appreciation for the association’s commitment to working with the U.S. Commercial Service. In attendance were leaders of the Fort Lauderdale Executive Airport, Port Everglades, and many local companies.