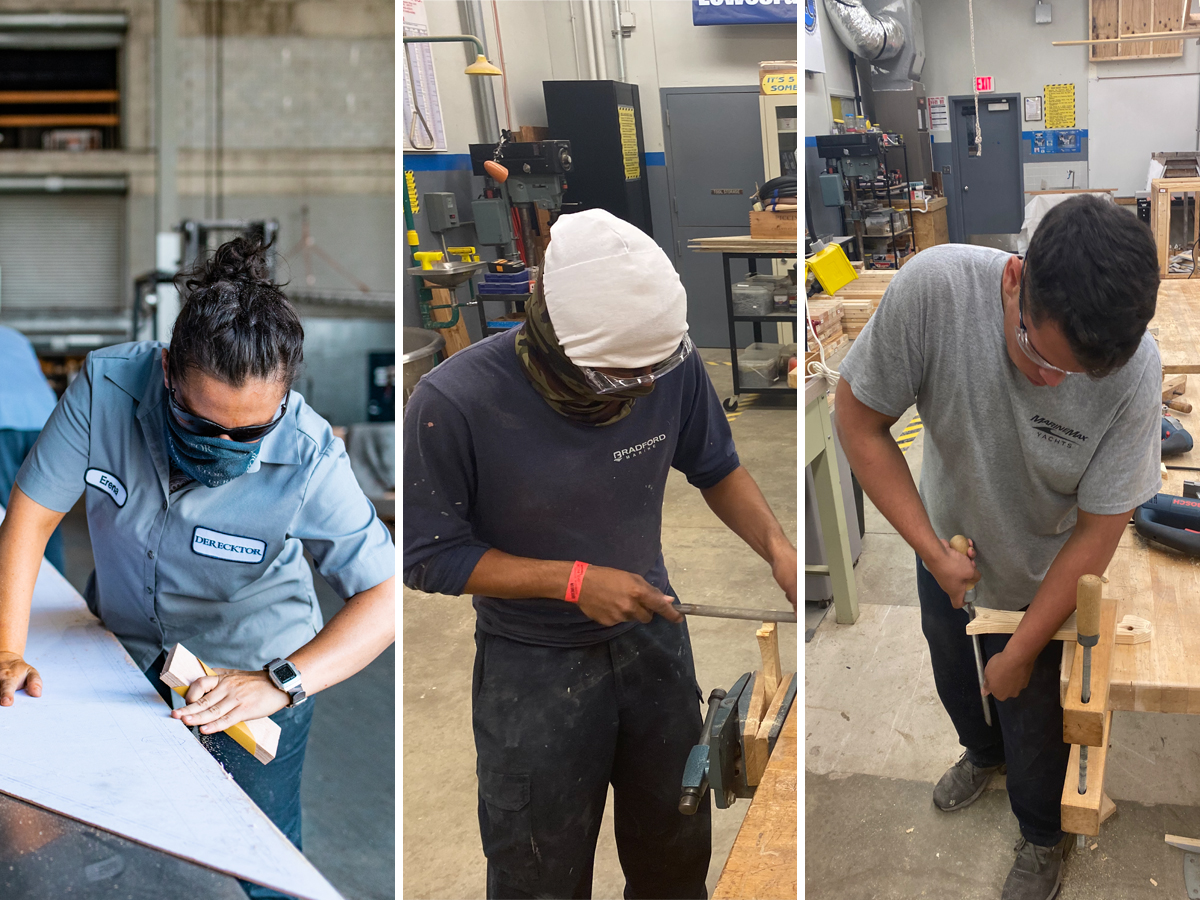 Faces in the Industry: YSTAP Graduates

This month we’re excited to be highlighting three faces in the industry, Erena Fridman, Tai Tran, and Andy Camblor who make up the first class of apprentices graduating from the Yacht Service Technician Apprenticeship Program at the end of the year. Get to know these three faces that have already made their mark in our industry and will continue to learn and grow on their own paths at the conclusion of the program.

Erena Fridman, Derecktor Shipyard
Erena is a member of the first class of graduates from the Yacht Service Technician Apprenticeship Program (YSTAP). Originally from Maldova, Erena began her professional career in digital marketing after earning her degrees from the University of Minnesota (Bachelor of Science in 2005 and Masters in 2014). She spent 8 years in that field but always had a passion for mechanics, boats, and the ocean. Combining all three, Erena took the plunge into the marine industry where she earned her Associates Degree in Marine Engineering from Broward College. From there she joined the team at Derecktor Shipyard and was identified as an ideal candidate for YSTAP. Throughout the two-year program, Erena has most enjoyed the departmental rotations in the on-the-job training as she has gained a broader understanding of the entire marine industry. Upon graduating, she will continue her path in our industry, continuing to study, learn, and grow professionally.


Tai Tran, Bradford Marine
A local to Fort. Lauderdale, Tai Tran is on track to graduate from the Yacht Service Technician Apprenticeship Program (YSTAP) in December 2021. Growing up watching his dad work as a painter in the marine industry, Tai’s interest in our industry piqued early. This led him to his first, and current job with Bradford Marine where he began working with his dad and enrolled in the YSTAP. Two years later, Tai has most enjoy learning the ins and outs of a yacht and the required service to maintain it properly. As the program teaches a wide range of shipyard competencies, Tai enjoyed the carpentry module most of all. Upon earning his certificate from the program, Tai plans to continue in his father’s footsteps becoming a finish painter at Bradford Marine.


Andy Camblor, MarineMax, Inc.
With a high school diploma and experience as a server at a high-end restaurant, Andy, a local to Fort Lauderdale, immediately knew he wanted to follow his passion for the marine industry and enter the workforce right away. He was hired by MarineMax, Inc. and identified by their leadership as a great candidate for the Yacht Service Technician Apprenticeship Program. Two years later, upon graduating from the program in December 2021, Andy will have gone from no marine industry knowledge to a wealth of knowledge of all the basic shipyard competencies. He has most enjoyed learning about all the different parts of the boat and their functions, specifically the running gear mechanics. Once he completes the program, Andy plans to continue to develop his skills in the industry and become a certified yacht mechanic.