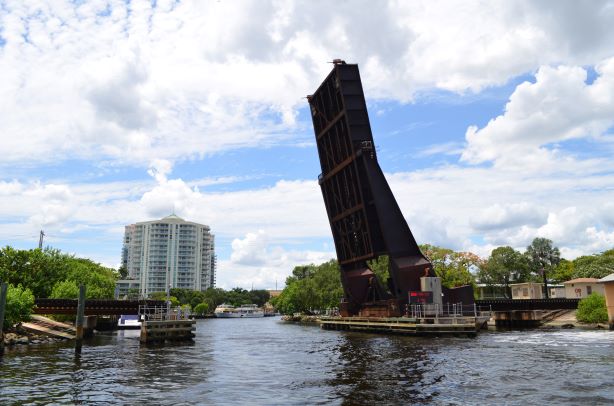 Prior to 2016, the U.S. Coast Guard (USCG) regulation that was in place required the FEC railroad bridge to remain up, otherwise known as the default position, when not in use by approximately 26 freight trains a day to allow for the USCG “reasonable needs to navigation” requirement on the river. With the advent of high speed passenger rail by Fortress Investment Group, parent company to FEC and All Aboard Florida, the USCG and MIASF negotiated a new regulation that required a bridge monitor, a shared 60 minutes out of every 120 minutes of use, a real-time mobile app that would alert users to bridge openings and closings, and informational signage, with penalties to be imposed on FEC for any violations. Aside from the lack of signage, technology problems with the app, and inconsistent communication, the new regulation still allowed for reasonable needs to navigation on the river.

In the early part of 2017, the FEC (freight) was sold to Grupo Mexico for $2.1 billion, however, Fortress Investment Group (passenger), then operating as “Brightline,” retained the development and easement rights all along the railroad corridor.

Due to a variety of technological difficulties, and a series of trespassers on the railroad, the train service, now operating as “Virgin Atlantic USA/Brightline”, has been routinely interrupted, causing east/west corridors of vehicular traffic congestion and gridlock. The FEC’s technology issues also resulted in an accumulation of scheduling violations, which have prompted the train operator to request a deviation of the regulation that was granted by the USCG for 180 days.

Throughout this process, MIASF has been diligent in meeting with the FEC, the USCG, the Florida Department of Transportation (FDOT), and various government lobbyists. Additionally, MIASF successfully helped to secure $750,000 in the State budget for FDOT to update a study from 2005 to identify solutions that will safeguard navigation without limiting progress.

We understand the need for reliable and regional transportation solutions, however, unless the new USCG regulation for the FEC Railway bridge includes defined, scheduled, and predictable openings per hour - using technology (the app), appropriate communication, and signage, the $8.9 billion marine industry and its 111,000 workers in Broward County will be negatively impacted by the FEC Railway bridge inhibiting reasonable needs to navigation with more passenger trains.

As the 6th largest metropolitan statistical area in the U.S. and the largest in Florida, our region will continue to grow. Plans for a new federal courthouse, a joint campus for city and county governments, as well as 7,000 new residential units in downtown Fort Lauderdale, on top of an expanding and growing marine industry, demand additional infrastructure. That level of growth demands flyovers over the railroad tracks on the east/west corridors of Commercial Boulevard, Oakland Boulevard, Sunrise Boulevard, and S.R. 84. It demands a higher iconic bascule bridge for passenger rail over the New River that stretches all the way to the Virgin Atlantic USA/Brightline train station on the north side of Broward Boulevard, so, like any world-class city, passenger trains don’t impede vehicular or marine traffic. It requires the greater Broward County community, which sits in the middle of regionalism, to support enhanced infrastructure projects. In fact, residents of this community demanded improved transportation conditions when they overwhelmingly voted in favor of taxing themselves to pay for it.